Gretchen gazed unseeingly at the book proof in front of her. She knew she had promised her friend on several occasions to edit his book once it was nearing completion. She had always counted on, to be completely honest, that the day would never come that she would not have to uphold her promises. But it had, and now she was dreading it. She liked her friend, but Gretchen never thought of him as a very good writer... How could Gretchen read something her friend wrote, and not take over the story in the editing process? That was the issue Gretchen was struggling with before Gretchen picked up her black pen and highlighter to edit the book, she decided to give it a quick read through first. The stories concept was sound, but the characters lacked depth and the story often wandered away from the main point of the story. The ending was...substandard to say the least.
Gretchen knew where she would like the story to go. How and where the characters could grow and develop, but that went beyond editing in Gretchen's mind. That was actually rewriting the story.
Slowly, like drawing out a splinter, she picked up the proof and her pen and highlighter.
What should she do?
Then it came to her, it was a simple answer really.
"I will start with the misspelled words and grammatical errors." For her friends writing really  wasn't very good.
Posted by Unknown at 7:26 PM No comments:

Hey everyone! My second edition of "A Slice of Life; Death" is now available on Amazon in both paper back form and kindle. The new cover design is right here. The price of which is $5.00 for both the kindle and the paperback version. If you want to catch a quick deal though, my first edition paperback version of this book is currently on sale on Amazon for $4.75 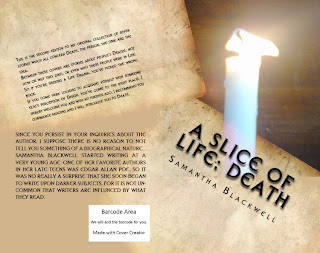 Thank you so much for your support!

We were standing on the edge of the world when I knew I could do it. It was about time really. I'd felt this way about Norman for a long while now. I was with new found confidence that I walked up to him. I didn't so much as blink as I gazed into his blue eyes. I reached for him and placing my hands on his chest, I pushed him off the bridge.
Posted by Unknown at 1:02 PM No comments:


All she hoped was The Maker of Faces would stay focused and didn’t get too excited or distracted during the show…
Posted by Unknown at 5:12 PM No comments: